I use git’s rebase command daily, it’s an invaluable tool for maintaining a clean and sane Git history. However, most people find it difficult to understand, or use it incorrectly, as it’s not the clearest command to use.

The first thing to understand, is that rebasing typically refers to two different (but similar) operations:

Say you have a main branch called master. Of course, you don’t develop directly against master, as that would be bad. Instead, you create feature branches (e.g. feature/foo-widget), develop on those, and when they’re done, you merge them back into master (or submit a merge request).

Now, let’s say you created your feature branch a few days ago, and now there are changes on master that you need on your branch to continue (or maybe your company has a policy of rebasing before you create a merge request).

You could simply merge master into your feature branch:

This is what a lot of people do. However, this dirties up your git history and is not the correct solution. Let’s look at how the branch looks after you merge your feature branch into master:

Commits are represented by circles, and named in the order they were authored. Both colored circles represent a merge commit.

And here is the git log output (notice the extra merge commit, cluttering up my history):

This problem is compounded on large feature branches where you’re merging master into your branch many times.

Instead, you should rebase: 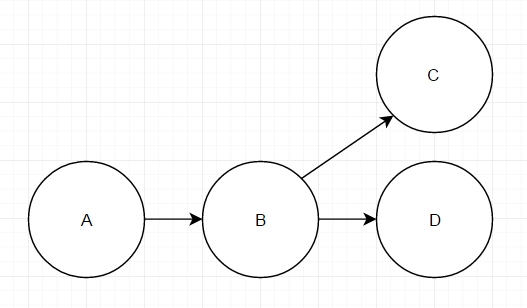 After rebasing, your commit graph looks like this (your commit was reapplied on the tip of master, which is D):

And once your feature branch has been merged into master, your commit history should look like this:

It’s important to note that you should never rebase a shared branch (like master or develop) as it rewrites history and requires a force push, which can disrupt other developers.

Here is a more detailed walkthrough:

Another useful trick I use is git pull --rebase instead if regular git pull.

Let’s say you have some local changes on feature/foobar that you haven’t pushed yet, and your co-worker just pushed his local changes to feature/foobar. If you do a regular git pull, git will do a merge, and you’ll end up with ugly git history and a commit message like this:

You want to avoid this clutter, so if you run git pull --rebase, it’ll do the following:

Then you can do a regular git push. Since you are only modifying history of commits you haven’t yet pushed, you do not need a force push.

When rebasing of any sort, it isn’t uncommon to run into merge conflicts. It’s important to understand how to resolve conflicts and continue your rebase.

What happens is that Git has rolled back your commits, fast forwarded your branch to a specified point, and is now re-applying commits one by one. Sometimes this will work fine, but sometimes your commits will now conflict with the updated branch, and Git will pause the rebase and ask you to resolve the conflicts.

To see which files have an error, you can just read the error message, or run git status:

So here, git is telling me that both of my branches modified README.md. If I open README.md, I’ll see the merge conflict indicators:

Merge conflicts are always marked with “<<<<<<<“. The first part of the merge conflict, as separated by “=======”, indicate the conflicting line from your current working branch. The second half indicates the conflicting line from whatever your merging in (e.g. another branch, or in this case, or commit that was rewound). To pick the correct code, you can just edit the file normally. You don’t even have to pick one or the other. Make sure to remove the merge conflict indicators though!

Now that I’ve resolved the conflict, I have to add the file to my staging area using git add README.md, then I can continue my rebase:

And since that was my only commit, the rebase finished successfully. If I look at my git history, I see the commit from my test branch AFTER the commit from the master branch:

And if I looked at the diff for d331fa3, I can see how the rebase affected it:

And that concludes the section on merge conflicts.

Interactive rebasing is the use of git rebase with the -i flag. This tool lets you edit commit history which can be very useful when you have a feature branch that you want to clean up before submitting it. It’s very common to squash commits (combine multiple commits), edit commit messages, amend commits (roll back to a specific commit, make a change, then re-apply later commits), all of which you can do with interactive rebasing.

To start an interactive rebase session, you must specify the range of commits you wish to deal with. The most common way of doing this is using HEAD~n where n is some number of commits:

The above command will start an interactive rebase session with the last 5 commits. After running that command, you’ll likely see vim (or some other editor) pop up with something like the following:

At the top you see the 5 commits you are dealing with, from oldest to newest. In the comments, you see various actions. For example, if you modify the text to put this:

Git will combine d61a3b3 and 8439627 into a single commit (this is called squashing a commit). Like rebasing your branch, an interactive rebase alters git history. Each commit you modify will get a new commit hash, so as far as git is concerned, it is a completely different commit. This means that if you have previously pushed the commits you altered, you’ll have to do a force push on your branch. This also means you should never interactively rebase a shared branch like master or develop.

9 Replies to “How does Git rebase work?”

I'm a team lead, software developer, and devops engineer (depending on the day). I love programming, and having a blog allows me to share things I've learned with others, and hopefully save somebody a bit of time!

Disclaimer: Any opinions expressed are solely my own and do not express the views or opinions of my employer.